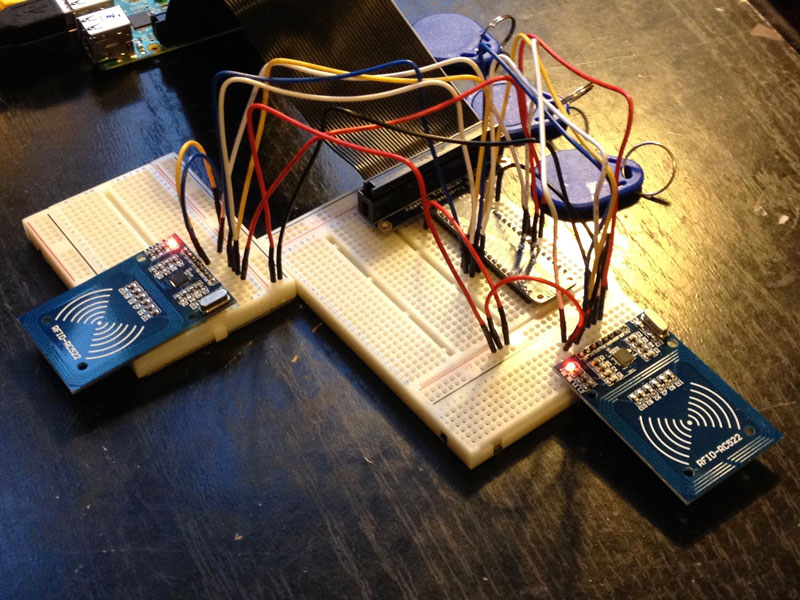 Note: This NFC project uses a Raspberry Pi 2 Model B, and the proceedure may be different to connect RC522 RFID readers to older Raspberry Pis. This is also a work in progress, and these notes are not yet complete.

A few friends from work and I are taking part in a sponsored climb, six of us climbing the height of the U.K. three peaks (11,180ft) between us on an indoor climbing wall over six hours. One part of our preparation is working out how we’re going to keep track of the height we have climbed as we go up and down an 8m wall.

What if each of us had an NFC tag on our wrists which we could tap on an NFC reader at the top of the wall? (Or might be safer to tap when we were safely back on the ground.) A slight complication is that there are two heights of wall we might climb, 8m and 6m – so we could have two NFC readers to tap, one for each wall height. This sounded like a nice Raspberry Pi project.

Looking on the Net, I first found an Attendance system using Raspberry Pi and NFC Tag reader by Yim which seemed a good place to start.

This application would only need to read the ID of the tags, so it wouldn’t read or write data to them – though that could be an idea for an improvement.

I expect I would need to wait a few seconds after a successful read before accepting another reading from the same tag/climber, so we don’t accidentally record multiple ascents for the same climber if they leave their tag in contact with the reader for a couple of seconds.

The original idea was to update a MySQL DB on an external webserver, so the data was safely off the Pi in case it crashed.

But my web server won’t allow an external device to write to its MySQL databases unless the external device’s IP address is registered (see Troubleshooting section below). However, running the Raspberry Pi off the eduroam WiFi network, we can’t get a static IP address for the Pi, nor can we be sure what the external IP address would be. So even if we did register the IP address it was using on eduroam, we couldn’t be sure the Pi would continue using that same IP address, and might find my web server blocks it from writing to its MySQL DBs.

So the new plan was to was to install Apache, PHP and MySQL on the Pi, and write to the Pi’s own DB.

But, because of the same problem knowing the Pi’s IP address on eduroam, our friends outside wouldn’t be able to connect to it to view our progress.

So the final plan was to write to the Pi’s own MySQL DB, use PHP on the Pi to build the web page (drawing on the info in the DB) – then copy that completed web page onto my web server.

This proved a good system, because the Pi periodically lost it’s WiFi connection, but the info was still being collected on the Pi, and could be uploaded to the web server when the WiFi connection picked up again.f

Only after buying my RFID readers did I notice posts about the different interfaces they support – UART, SPI, I2C. There was also a post (by FLYFISH TECHNOLOGIES » Tue May 06, 2014 11:34 pm) saying that different readers were hard wired to use just one of the three interfaces.

My original idea was that as we’d have three people climbing at any one time, they could have an NFC reader each. Reading a little about the different interfaces, it seemd I2C would be ideal – but it looks like the readers I bought had SPI interfaces which the Pi only has (easy) support for two readers. Luckily I think I can get away with two readers, shared between climbers, depending on the height of the wall they are climbing.

Setting up the Raspberry Pi

When it comes to attaching an RC522 reader to a Raspberry Pi, many people link back to Mario’s seminal Utilizando el lector NFC RC522 en la Raspberry Pi (online translators help when my Spanish fails).

The set up I went through was:

This project uses GPIO.BOARD, but the GPIO pins column lists the BCM numbers, because it was easier to wire them up with the T-Cobbler when testing.

I’ve based my code on MFRC522-python code by mxgxw, and adapted it to use two RFID readers. At the moment the code continually switches the SPI master between the two readers, polling them for chip reads – which probably isn’t the most efficient way to do things (if anyone who understands the SPI interface and Raspberry Pi can suggest a better way, or a different interface, then I’d be very interested). But as my application doesn’t have to do anything but log chip reads, then it will probably manage Ok.

I also noticed that the chip IDs read in by the code can sometimes be corrupted – for my purposes, I’ve just hardcoded the chip IDs into the python script, and only log a read if it matches one of those IDs (again, not very efficient, and it would be great to improve it).

As probably many others do, my web host’s security required me to register my Raspberry Pi’s external IP address with them before my python scripts could write to my MySQL DB on their servers. This took a little messing around to get working (especially as the IP address they say on that page that we need to connect to doesn’t seem to be the correct one!). I could use the Pi as a web host and database server, but when it’s connected to the University’s eduroam on the day, that wouldn’t allow external people to view the progress page.

Auto-run the script on boot

I used systemd, as detailed by Matt in How To Autorun A Python Script On Boot Using systemd

(though ‘Type=simple’ seemed to work for my script).

My Unit file at /lib/systemd/system/team_track.service contained:

After refreshing the daemon with sudo systemctl daemon-reload I told systemd to start the service during the boot sequence, with:

The following commands are useful to get the status, or stop the service:

As usual, this was a very rushed project. A lot of information hardcoded into the Python scripts could be handled better – e.g.:

Storing some data on the tags themselves could be an idea, maybe have the names of the people on the tag instead of listed in the people table of the MySQL DB (but maybe that wouldn’t simplify things after all, especially as I seem to get data corruption when reading the tags).

In the end the area roped off for our challenge only contained 8m walls – so we set both NFC readers to register 8m, instead of one for 8m and one for 6m.

While we climbed, this webpage displayed our running total (where it stays, frozen in time).